As promised here’s the story/tweak/how-to on my latest creation, my classroom calendar. As always, scroll down to the, “how to,” section if you’d like to cut-to-the-chase.

A few years ago, most of the math classrooms at my school were painted to become dry-erase board. Given I had two walls with 24′ chalkboards, it was A LOT of white in my room. After a couple of days of working in a room that felt like an operating room (my students would say Antarctica given the temperature), I brought in some painter’s tape (affiliate link) from home to break up the gargantuan white spaces into four separate spaces. A few months later, the vertical setup of my calendar continued to prove problematic for students across the room trying to see the bottom. Given the fact the painter’s tape removed cleanly two months after the fact, I quickly fashioned this version of the calendar seen in a pic from a post last year: 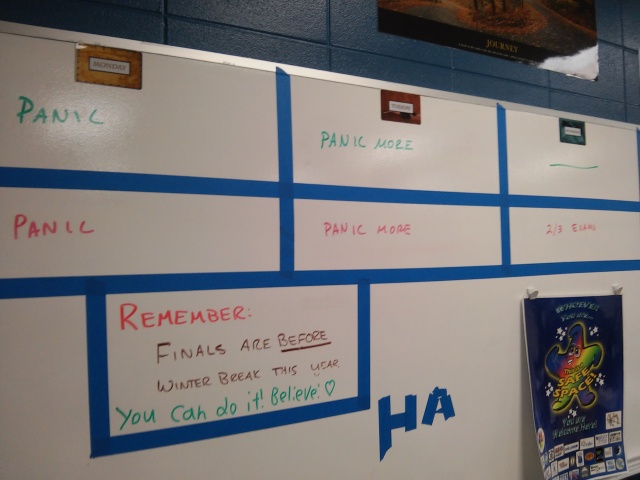 Last spring, I came across the idea of Vertical Non-Permanent Surfaces and Visible Random Groupings (aka VNPSs) on SlamDunkMath. I’m late to that party, I realize but hey I showed up. Check that out if you have a chance. It was fun to see some students come out of their shells with it. But as you can see at over twelve feet, my calendar took out a large portion of what I could have my students use. I planned on resolving that over the summer.

This past week during in-service, I ran to my local big-box home improvement store for a 4 foot by 8 foot piece of melamine/shower board and hopefully have them cut it down. Found the boards in the paneling section but didn’t find any personnel to do the cutting. I did find, however, pre-cut 2 foot by 4 foot pieces. A little pricier and smaller than I wanted but then I had an idea: what if I used a few of these for the calendar and used the new dry-erase boards from our recent model for their original intentions?

By the end of the project, I purchased two 2′ by 4′ boards, a roll of 1″ of painters tape, and some large Command hooks. The top of the installed dry erase boards are grooved and were thick enough to support the calendar boards. In fact the new boards leaned nicely against the wall. Not wanting to chance the boards falling, I used the Command hooks to keep the top of the boards from moving off the wall as pictured here: 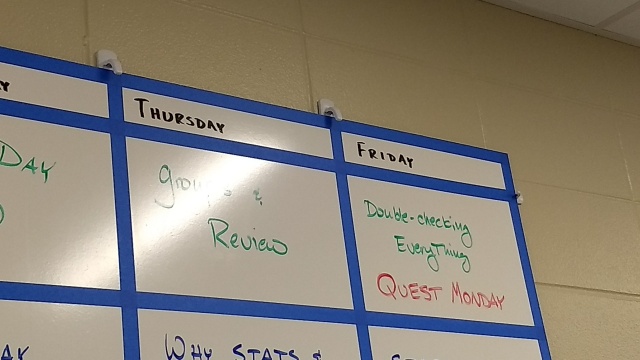 I left a little bit of a gap so I could then move each board an inch horizontally and just enough vertically to get out of the groove of the installed board and take them down to write on them. I know from our global compliance training our HR office is thankful for that. If reaching the top of the board would be too much for you, I would recommend using a number of Command strips to support the boards from below as I’ve read of teacher’s doing to make additional space for VNPSs. The blue painter’s tape is great for marking off the days in addition to covering the edges so they don’t peel apart.

Here’s the final version. Kids can see it from anywhere. It’s hard to write on when it’s in place so it’s harder to sabotage. My classes have more room to write math problems on the board. #missionaccomplished 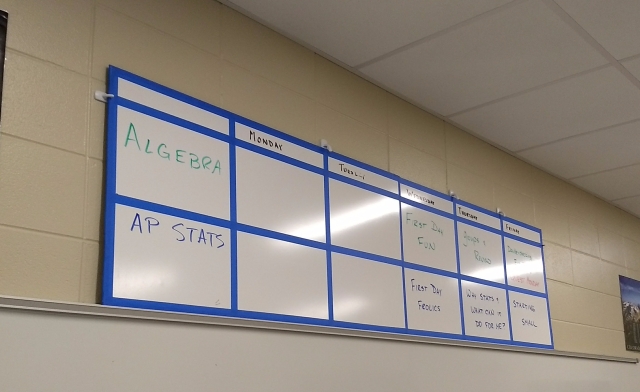 Hopefully you get a little inspiration out of this – please share either on Twitter so everyone can see or e-mail. I’d love to see what you create!

Husband, father, and math teacher (usually in that order). Love sane use of technology in the classroom, great questions, and using time wisely. Current dreams: do some consulting and get on a particular team-based reality show.
View all posts by Aaron Hayes →
This entry was posted in #MTBoS, Best Practice, General, Teaching. Bookmark the permalink.